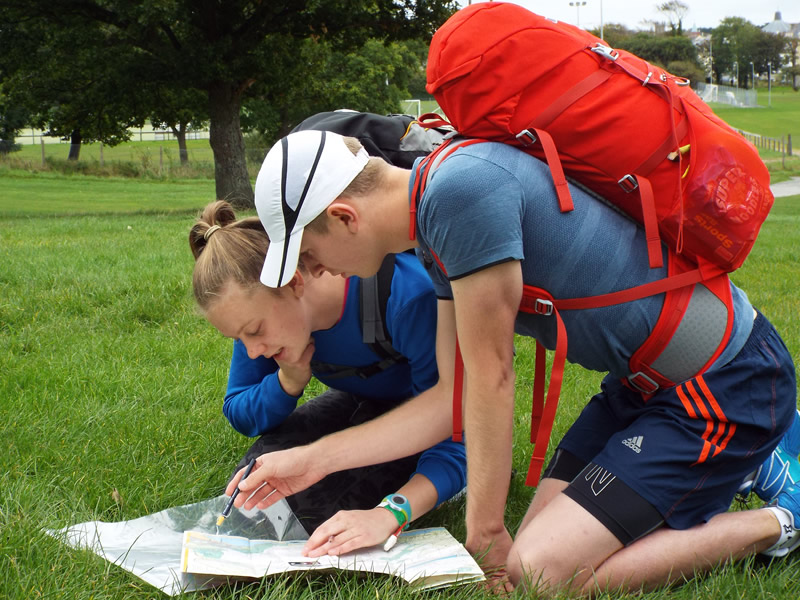 None of the top local teams were entered in this years event, as regular winners Brian Ervine and Neil Carty were in Alaska for the world fell running championships and Deon Mc Neilly was saving himself for a crack at the World masters title (veteran to you and me) the following weekend in Germany. Deons regular partner Damian Brannigan was entered with the upcoming star of the local scene, Stephen Cunningham and great things were expected of them despite having been branded team Horlicks following the revelation by Steve that he supped the brew each morning. Charlie Stead from Newcastle upon Tyne and local boy now based in Wales Bob Johnston looked a good bet, as did the team from Dublin of former Comeragh MM winner Gerry Brady and Adventure racer Eoin Keith. Regular visitor and previous runner up Pete Baxter from Scotland was also entered.

Robin Bryson has now moved on and so Steve Linton our new course planner was nervously waiting in the wings wondering how his courses would be received. Steve is one of Irelands top orienteers, a former winner of the B Class, and a runner up in the elite class so we were indeed fortunate to find somebody of such calibre to replace Robbie.

The weather forecast was reasonable for the weekend, some cloud, sunny spells and a splash of rain here and there. People familiar with the mountains know that such a report for the lowlands generally means clouds for the hills and so it proved with all courses shrouded for long portions of the day. As the competitors streamed into the forest Steve and I looked at each other and thought, “Hum, re-entrants and mist”

The first problem of the day however had nothing to do with the weather. A local farmer happened to have rounded up his flock of sheep and was bringing them down through the woods at the same time as runners were being started off at minute intervals. Sheep and runners met and sheep being nervous of brightly coloured sometimes overloaded people bolted into the forest. The irate farmer was on a lost mission trying to round them up for more and more runners kept appearing. It took a visit by Denis Rankin to the farmer later in the day to smooth out the problems, and also to address concerns he had about competitors crossing his land. The result was that the day two B competitors had an out of bounds area applied to their course for day two.

The elite and B courses followed a figure of eight route which took them as Far West as the Spelga dam area, then back across the hills to the overnight camp in a farmer’s field close to the Annalong woods. The C course was more direct and had no sting in the tail this year so most competitors arrived at the camp in reasonable time. All courses had many re-entrants, and small spurs as markers, making for some technical navigation especially in the misty conditions. Despite the potential to loose lots of time at such marks most teams fared reasonably well and few complained.

HORLICKS IN THE ELITE CLASS

The clear leaders of the Elite class were Charlie Stead and Bob Johnston, 25 minutes ahead of Gerry Brady and Eoin Keith. Steady navigation seems to have been the winning formula as Damian Brannigan and Steve Cunningham were probably the fastest team over the ground but lost out heavily time wise trying to find some of the marks, A horlicks in other words! Paul Mahon and John Mac Enri led the B class but by only 2 minutes from Billy Reid and Gerry Kingston. The ladies in the B class were involved in a titanic struggle with less than 20 minutes separating the top three teams; Elspith Scott and Jane Robertson holding the advantage over last years champions Heather Cairns and Pauline O Hara. The C class was more clear cut with Mark Leyland and Charles Johnson holding the veteran regulars Sennen O Boyle and Tommy Duggan in check. There were also a number of good mixed teams in contention.

This years over night campsite was on the Annalong side of the Mournes in a field owned by farmer Kieran Mooney and as has been the case in recent years with farmers who have provided overnight camps, he couldn’t have been more helpful. He grazed the field with sheep up until two weeks prior to the event, which ensured the grass was short yet the risk of picking up shoe attachments was minimal.

Day two dawned cool and autumnal, and the clouds hung low on the hills. As with the previous day navigation was going to have to be up to scratch in order to hit all the marks correctly. The Elite class started at 8 o clock on a route which took them north then west to the far side of the Silent valley before turning north again to head back to Tollymore. The B course was similar with an 8.15 start then at 8.30 the C class headed off on a more direct course for the finish line and the creature comforts of civilisation. The low clouds caused problems for some teams but most fared reasonably well. At the head of the elite Stead and Johnston played a nip and tuck game with Brannigan and Cunningham which was only resolved over the final few marks in the forest to see Brannigan and Cunningham arrive home first on the day but Stead and Johnston were comfortable overall winners. Gerry Brady and Eoin Keith didn’t go so well on day two and lost their overall second place, but comfortably held off the challenge of veteran team Yiannis Tridimas and Alan Duncan. It should be noted that Eion Keith’s performance was especially impressive as he had broken his arm a few weeks before the MMM, yet managed to compete with his arm in a plaster cast – how’s that for extra weight??

KINGSTON AND REID LEAD B CLASS

Paul Mahon and John Mac Enri didn’t have such a good day in the B class and lost their lead to Billy Reid and Gerry Kingston who set a blistering pace which nobody came close to matching. Mind you Paddy Mallon and Peter Mc Clenaghan had a very good run to be second fastest on the day, a result which moved them up to fifth place overall. After the close race of the previous day, Jane Robertson and Elspeth Scott enjoyed a comprehensive win on day two and were comfortably overall winners of the ladies category.

Mark Leyland and Charles Johnston won the C class despite coming forth on the Sundays run, a reflection of what was happening throughout the class with teams who had fared badly on day one turning in good runs on day two and visa versa. One very steady performance came from the mixed team of Charles Dean and Jeanette Kendall, third fastest time on both days which resulted in second place overall.

The sun shone as teams flopped down on the grass and caught up on the gossip. Some were not so comfortable with stiff muscles and blisters but spare a thought for Jenny Orr. Her knee had to be stitched up by our doctor at the overnight camp, then on day two she tripped and in an effort to protect the knee landed on her face resulting in even more work for the doctor. Fortunately the grazes looked worse than they were and hopefully the “Die Hard” look will soon be replaced by Jenny’s normal pleasant features.

The prize giving saw us introduce cash prizes for the top three teams in the Elite class with the winners taking away £500 for their efforts. We hope to continue this cash prize trend in future years. Surf Mountain our main sponsor provided the same range of prizes as on previous years and we were able to spread them over more categories in the B and C classes. So that’s that. Surf Mountain Mourne Mountain Marathon all wrapped up for another year. Hope you enjoyed it and hope to see you again next year …..But beware potential rule breakers; secret marshals and other means will be used to ensure teams visit all markers correctly next year. This may be the friendly Mountain Marathon but we are not that friendly.